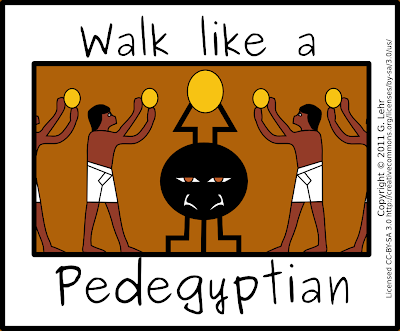 at December 17, 2011 No comments:
Email ThisBlogThis!Share to TwitterShare to FacebookShare to Pinterest
Labels: cartoon, drawing, egyptian, pentapede, walk like a pedegyption

Had a quite annoying experience with my new linux laptop yesterday, after a routine update, it failed to start into X. In brief, LightDM has to wait until the nvidia kernel module is loaded. Originally, the /etc/init/lightdm.conf file had a `sleep 2` command in it, before it attempted to run `exec lightdm`. The upgrade changed the file, removing the sleep line, so that when I rebooted, X would fail, saying that it couldn't load the nvidia driver.

The fix for now, hack though it is, is to add the `sleep 2` line before the `exec lightdm` line. Boot is slower, but at least it works.