Here's something awesome for you all to play with: ScribblerToo. With it, I have made the following: 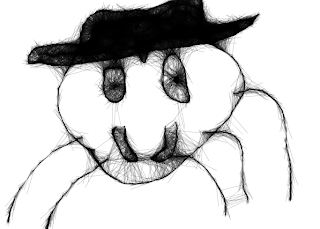 The obligatory Pentapede (in a hat!) 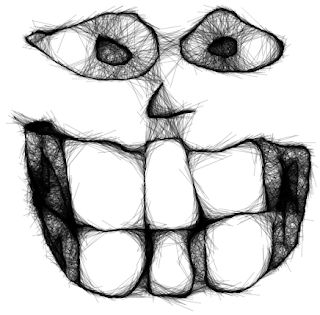 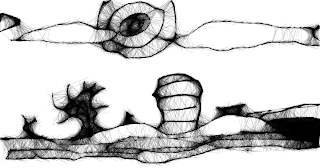 Cheerful landscape on a sunny day
at May 28, 2011 No comments:
Email ThisBlogThis!Share to TwitterShare to FacebookShare to Pinterest
Labels: art, drawing, line drawing, pentapede, scribblertoo

Neil Gaiman combines Doctor Who, The Hitchhiker's Guide to the Galaxy and Harlan Ellison's "I Have No Mouth and I Must Scream" into a story filled with unrealized potential.

The Doctor, receiving a distress call, apparently from another Time Lord, rushes the TARDIS beyond the universe to a place almost, but not quite, entirely unlike a soap bubble on the edge of the universe. The TARDIS' matrix is captured by a "family" trio and stored in Helena Bonham Carter (played by Suranne Jones), which allows her (the TARDIS) to finally express to the Doctor how good it is to meet him. Unfortunately, the planetoid-junkyard they've landed on is actually a malevolent TARDIS-devouring space urchin called "The House." The House, upon learning that the Doctor and the TARDIS are the respective last of their kinds, hijacks the TARDIS for a joyride, with Amy and Rory inside.

After two of the trio, "Auntie" and "Uncle", die for no particular reason, the Doctor and Helena attempt to construct a minimally-functional TARDIS from the half-digested remains strewn about, and the House entertains itself (at Rory's suggestion) by torturing the two humans and apparently killing Rory twice (but it's okay, he picked up some extra 1-Up mushrooms after that nasty bit with the Romans so he's safe).

Now en route, the TARDIS and the Doctor telepathically guide Amy and Rory to an archived control room, where they land, and callously obliterate the ood that the House was controlling. Finally, the Doctor tricks the House into bringing them all to the main control room ("Don't throw me in the briar patch!"), Helena dies and the TARDIS' matrix regains control of the TARDIS. Everyone lives happily ever after, especially Amy and Rory, since they no longer have to sleep in bunk beds.

Throughout the entire episode, I just can't shake the feeling that Gaiman doesn't *get* it. His attempts at humor are lame ("humans are bigger on the inside!"), the Amy/Rory chase sequence in the TARDIS is boring, and, while some of the ideas are cool, they just aren't well executed.

Sadly, everyone else seemed to really enjoy this episode, so I'm sure we'll see more like it.
at May 15, 2011 No comments:
Email ThisBlogThis!Share to TwitterShare to FacebookShare to Pinterest
Labels: doctor who, doctor's wife, dr. who, review, television

A fresh sea breeze blowing on your face; the sun shining pleasantly down; the gentle rock of a ship as it makes its way across the boundless ocean! What more could a young lass ask for? Pirates, that's what! Scurvy sea dogs, out for adventure and treasure, buckling all the swashes that are fit to buckle. A rousing tale of adventure, set on the high seas.

But, what if your budget doesn't allow for exotic locations? What if you're stuck filming inside all day due to the rain? (It gets so nasty sometimes that the actors just REFUSE to go outside!) Then it's time to turn to the old nautical standby, the Becalming! That's right, no sailing anywhere for your characters this week, the winds have died and the ocean is calm and still. Supplies are running low, tensions are high... and crew members start disappearing! Is it murder? Is mutiny cautiously lifting its fuzzy head above decks for a quick peekaroo?

No! The scourge of all seafaring folk awaits, turning to dust all who hear its song. It's a... siren! But not just any siren, a ghost siren! Doomed to spend eternity attacking passing ships with its plaintive lament, until it turns out it's actually an alien hologram! Bet you didn't see that twist!

The oldest and greatest threat to mankind has always been itself, or so it is believed. But what if there were a vast network of creatures that could control your very thoughts and actions, and erase every memory you ever had of them? Well, you need look no farther than--!

You'll want to look hard and deep at the universe when you next see it. Deeper, deeper, and just beyond that you'll find the best plot bubble ever, resting iridescently just tangent to the edge. There, in a little planetoid we like to call "the scrapyard at the end of the universe" (apologies directly to the late, great Douglas Adams from his good pal, Neil Gaiman), lurks a monster, ready to devour the oldest and wisest of your troupe!

Just kidding, I really meant "devour the empty corpse of the silliest contrivance dressed up as an opportunity for character development yet"! What a lark!

Well, before you go, don't forget to take a look at our impulse buy items! Slightly tarnished TARDIS control rooms, .50 nuyen apiece. Space-time eversions that seem complex but are actually quite mundane, .25 nuyen for two! And you'll want a six-pack of Rory Williams, just in case you have to knock a couple off to pull the plot out of the doldrums!

As always, when it's time for Action, Adventure, and the loudest sonic screwdrivers available, come on down to R'thoria's Used Plot Elements!
at May 14, 2011 No comments:
Email ThisBlogThis!Share to TwitterShare to FacebookShare to Pinterest
Labels: curse of the black spot, doctor who, doctor's wife, dr. who, pirates, r'thoria, rory williams, RUPE
Newer Posts Older Posts Home
Subscribe to: Posts (Atom)